Sheikh Abdel-Azeem Salhab is the head of the Muslim Waqf (Endowment) Council in Jerusalem.

The Waqf is the religious custodian that controls and manages the current Muslim holy sites on and around the Temple Mount compound. Jordan currently exercises control over the Waqf, but the body is greatly influenced by the Palestinian Authority.

In his appointed position, Salhab directly oversees all of the management and operations of the Islamic sites on Temple Mount. He is considered the most senior Jordanian figure in the Palestinian territories. 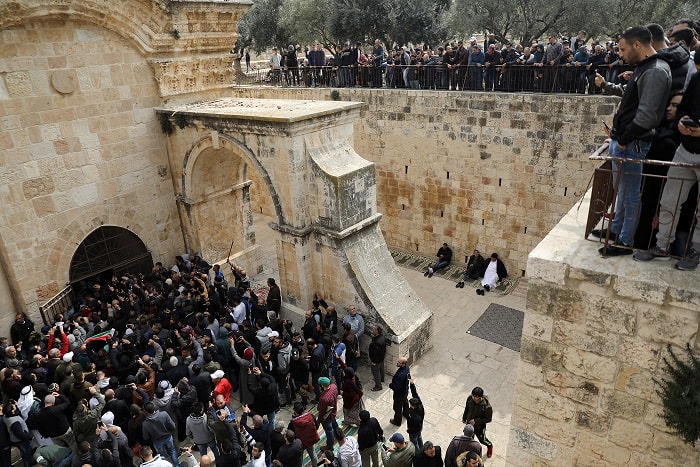 Salhab is considered one of Jerusalem’s leading Muslim religious authorities. However, he has used his position as a religious authority not to pursue peace, but to provoke tensions between Palestinians and Israelis by explicitly calling for violent riots and fostering a volatile atmosphere surrounding Temple Mount.

In February 2019, Salhab personally opened the gates of the Bab al-Rahma compound, known as the Gate of Mercy or Golden Gate, which had been sealed by Israeli officials in 2001 during a violent Palestinian uprising because it was being used by members of the outlawed Islamic Movement in Israel Northern Branch and Hamas for political activities.

In doing so, Salhab’s knowingly incited violent riots on the Temple Mount complex and intentionally exacerbated tensions with Israel.

As a result, Salhab was briefly arrested and temporarily banned from Al-Aqsa Mosque for 40 days and the Bab al-Rahma compound was again sealed by Israeli authorities.

Following his ban, Salhab told the Arab48 news website that, “The Al-Aqsa mosque is the property of Muslims alone, and no other religion has the right to it.”

Under the current agreement between the Waqf and the Israeli government, Jews are allowed to visit Temple Mount but are forbidden from praying at the site, considered the holiest site in Judaism and the site of the First and Second Temple.

Sanctioning the opening of the gate, the Waqf is attempting to change the status quo at the sensitive site by convening in the closed area.

In July 2020, Israeli courts ordered the extended Bab al-Rahma closed following a petition supported by solid evidence submitted by Jerusalem police that the site was again being used for Hamas activities and as a base for the terrorist group in Jerusalem.

In response to the court ruling, Hamas warned that “any harm to al-Aqsa Mosque would ignite war” in which Israel would pay a price “with blood and soul.” The designated terrorist organization called on Palestinians to storm the site in response to what they considered a declaration of war, a message that is nothing short of a clear incitement of violence against Israel and the Jewish people.

Defend Jerusalem is waging a legal war against Abdel-Azeem Salhab.

We intend is to forbid Salhab from entering the city of Jerusalem, banning him and his dangerous actions from inciting riots and undermining Israeli sovereignty in Jerusalem.

Defend Jerusalem has issued a legal letter requesting information to initiate an investigation into Salhab’s legal status in Israel.

Abdel-Azeem Salhab’s residency status in Israel and the City of Jerusalem is unknown. With no legal status or residency in the city, his presence there is illegal.