Charge sheet says 17-year-old targeted victims due to their Jewish appearance, shared clip with friends, one of whom posted to TikTok where it went viral 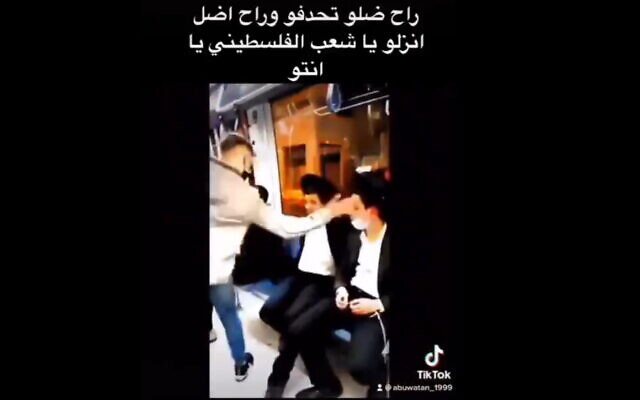 In the video posted on TikTok, a suspect from East Jerusalem is seen slapping two ultra-Orthodox Jews on the light rail in the city, on April 15, 2021. (video screenshot)

State prosecutors filed an indictment Tuesday against a 17-year-old Palestinian resident of East Jerusalem who was filmed violently slapping a pair of ultra-Orthodox passengers on the city’s light rail last month in a clip that went viral on social media along with several similar ones, and contributed to boiling ethnic tensions in the capital.

The suspect was charged with racially motivated assault and invasion of privacy in the indictment, filed at the Jerusalem Juvenile Court.

According to the charge sheet, the defendant sought out the two victims due to their Jewish religious appearance and decided to attack them because of it.

He was on the train with six of his friends and when it arrived at the Shuafat station, he approached the two victims and slapped them both in the face while one of his peers filmed the altercation.

The two ultra-Orthodox young men suffered mild injuries, and one of them had his glasses broken.

The defendant then shared the video with several of his friends, one of whom posted it to the TikTok social media site with the Arabic caption, “You will continue to delete and I will continue to upload. It’s either the Palestinian people or you.”

Upon filing the indictment, the prosecution also filed a motion to extend the travel restrictions that have been placed on the defendant since his release last month.

The video was one of roughly half a dozen clips that were shared on TikTok showing Arab Israelis assaulting Orthodox Jews and led to mass protests by the ultra-nationalist Israelis, including hundreds from the far-right Lehava group, whose members demonstrated near the Old City’s Damascus Gate where hundreds of Palestinians were gathered on an evening of Ramadan last month, leading to major clashes with police.

Also on Tuesday, police arrested a 19-year-old resident of Qalansawa after he was allegedly filmed setting an Israeli flag on fire in another video that was posted to TikTok.

Police were slated to bring him before a judge later Tuesday and ask to extend his detention.

The Rishon Lezion Municipality, which employed the suspect as a sanitation worker, issued a statement expressing its dismay over the incident, adding that the teen had been fired as a result.