Crowds again allowed to observe annual Air Force display in the sky after COVID restrictions rolled back; other public festivities, private gatherings being held throughout country 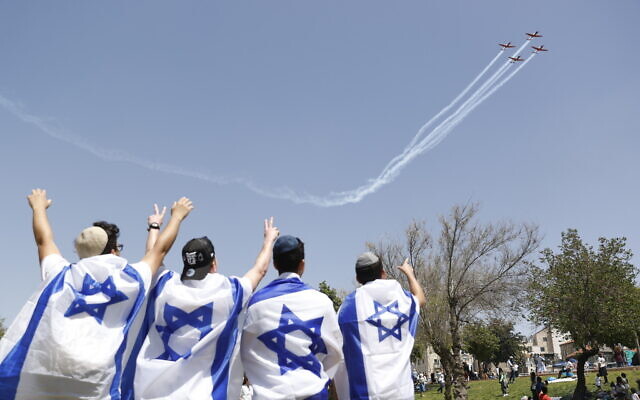 Israeli Air Force planes were jetting across the country on Thursday to mark Independence Day, with crowds again permitted to watch the annual flyby after coronavirus restrictions were significantly relaxed.

The flyover, a popular and iconic feature of Independence Day celebrations, is passing over more cities and towns than usual this year in what the Israel Defense Forces has called a “salute” to all Israeli citizens.

At 8:45 a.m., military aircraft flew over President Reuven Rivlin’s official residence in Jerusalem, ahead of an annual ceremony in which 120 soldiers are awarded the President’s Medal of Distinction.

The flyby itself kicked off at 10:30 a.m., with the planes set to zigzag across the country until 1 p.m.

Following is a partial list of flyby times for some of the major cities across the country:

A full list (Hebrew) of flyover sites and times can be found here, as well as a link to a smartphone application to track the aircraft.

Last year, during the onset of the COVID-19 pandemic, the flyby saluted medical staff over the nation’s hospitals.

Other official Independence Day events scheduled for Thursday include the International Bible Contest, which began at 11 a.m., and the Israel Prize ceremony, which will be held at 6:30 p.m. 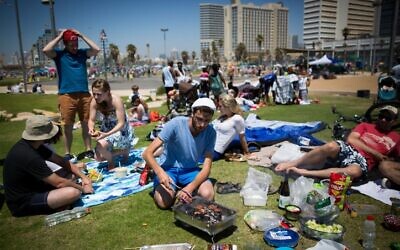 Israelis also traditionally celebrate the holiday with private gatherings that usually include visits to beaches and parks and outdoor cookouts.

Municipalities will be permitted to hold Independence Day celebrations for the vaccinated. In locales with limited risk of infection, depending on the size of the venue, up to 3,000 vaccinated people will be allowed to gather indoors and 5,000 outdoors.

Independence Day began Wednesday evening as Memorial Day came to an end, with the annual state ceremony at Mount Herzl in Jerusalem.