Albert Bourla hails partnership between the Jewish state and his pharma firm: ‘We are demonstrating that through mass vaccination we can defeat the COVID-19 pandemic’ 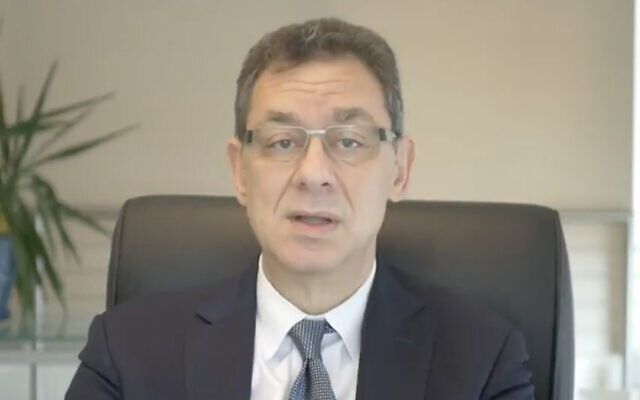 Israel paid tribute to the chief executive of international drug maker Pfizer Inc. during its Independence Day celebrations Wednesday, thanking him for a partnership that has helped the country carry out one of the world’s most successful coronavirus vaccination campaigns.

At Israel’s main Independence Day ceremony in Jerusalem, Pfizer CEO Albert Bourla delivered a recorded video message broadcast on national TV: “Together we are demonstrating that through mass vaccination we can defeat the COVID-19 pandemic and save lives.”

Bourla, a son of Jewish Holocaust survivors from Greece, had reportedly been invited to attend in person as a representative of Diaspora Jewry but was unable to come.

In response to heavy lobbying from Prime Minister Benjamin Netanyahu, Bourla agreed to provide Israel with enough Pfizer-BioNTech vaccines to inoculate the country of 9.3 million people. In return, Israel has agreed to share data from its campaign with Pfizer.

Israel has vaccinated over three-quarters of its adult population in just over three months. Infection rates have plummeted, allowing the country to reopen its economy in recent weeks. Although Israel has come under some criticism for not sharing more of its vaccine supplies with the Palestinians, its vaccination campaign is widely seen as a success.

“We have shown that there is a path back to normal, and that definitely is something the entire world can celebrate,” Bourla said.

The video was shown during celebrations at Mount Herzl, a compound that includes Israel’s national cemetery. The ceremony included musical performances and the lighting of symbolic torches by people recognized for their contributions to society.

The evening celebrations began the transition from Israeli Memorial Day, a solemn day honoring fallen soldiers and victims of militant attacks, to the joy surrounding Israel’s 73rd anniversary of independence. The celebrations continue Thursday, when millions of Israelis are expected to flock to beaches and parks for picnics and barbecues and while the air force performs flyovers across the country.