Israel: We’ll do whatever it takes, ‘definitely’ stop Iran from getting bomb

Israel: We’ll do whatever it takes, ‘definitely’ stop Iran from getting bomb 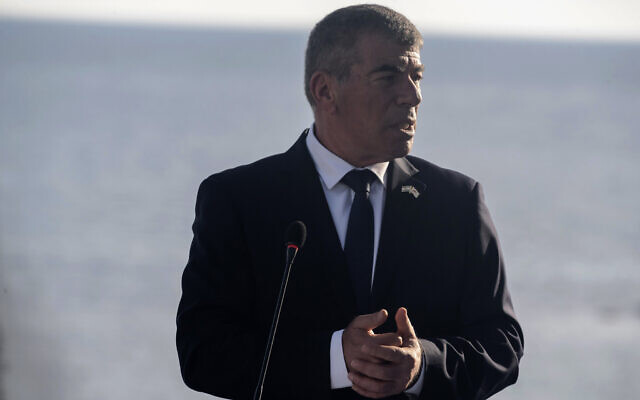 Minister of Foreign Affairs Gabi Ashkenazi talks to the media during a press conference after a meeting of the ministers of foreign affairs of Cyprus, Greece, Israel and United Arab of Emirates in city of Paphos, Cyprus, Friday, April 16, 2021. (Iakovos Hatzistavrou Pool via AP)

Israel’s foreign minister said Friday that his country was determined to stop Iran from building a nuclear weapon, after Tehran promised to step up its uranium enrichment process.

“We will do whatever it takes to prevent the extremists [in Iran] from succeeding, and definitely will prevent this regime from having a nuclear weapon,” Israeli Foreign Minister Gabi Ashkenazi told reporters on a visit to Cyprus.

Iranian officials said the country had begun enriching uranium up to 60% purity following an attack on its nuclear facility at Natanz, in central Iran, on Sunday, that it blamed on Israel.

Askenazi, a former army chief, met with the foreign ministers of Cyprus and Greece, Nikos Christodoulides and Nikos Dendias, as well as Anwar Gargash, a top presidential aide in the United Arab Emirates.

Israel and the UAE normalized relations in a landmark deal last year, and the four countries represented at the meeting Friday promised to boost cooperation in defense, energy, tourism, and other sectors.

Meanwhile, Washington has conveyed to Israel in no uncertain terms that the “chatter” about its alleged involvement in the blast at the Natanz nuclear facility early this week must stop, warning that it is dangerous and detrimental as well as embarrassing to the Biden administration as it attempts to negotiate a return to the nuclear deal with Tehran, Channel 12 news reported Friday.

The unsourced report said the message was conveyed to Jerusalem through several channels in recent days.

The network further cited unnamed Israeli security officials expressing concern at the uncharacteristic degree to which Israel has allowed itself to be tied to the attack on the nuclear site. The officials questioned whether the increased bluster was an attempt to affect nuclear negotiations in Vienna, or perhaps an effort by the prime minister to use Iran for internal political gain.

Israel has not officially commented on the sabotage at Iran’s main uranium enrichment facility, which an Iranian official has said damaged or destroyed thousands of centrifuges.

But there has been plenty of anonymous confirmation in the Israeli and foreign media by unnamed intelligence officials, with detailed accounts of the bomb attack that reportedly cut off the power supply to centrifuges and caused some of them extensive damage. And officials, from Prime Minister Benjamin Netanyahu on down, have hinted at Israeli responsibility.

Israel is normally completely silent on the secret exploits of its security services, and Israel’s military censor routinely prevents publication of such details, forcing local media to cite foreign media reports, but that did not happen this time.

Iran has directly blamed Israel for the attack and vowed revenge.

Amid the heightened tensions, Israel’s security cabinet was set to meet Sunday for the first time in some two and a half months to discuss recent developments. Meetings of the high-level forum are usually a weekly affair, but have been another casualty of the ongoing dysfunction in the power-sharing government of Prime Minister Benjamin Netanyahu and Defense Minister Benny Gantz.

Iran’s moves come as it attempts to pressure negotiators in Vienna amid talks on restoring its nuclear deal with world powers after the attack on its main enrichment site.

Speaking Friday, US President Joe Biden also called Tehran’s latest step contrary to the deal. “We do not support and do not think it’s at all helpful,” he said. But he added that the Vienna talks had not been sidetracked.

“We are nonetheless pleased that Iran has agreed to continue to engage in indirect discussions with us on how we move forward and what is needed to get back” into the nuclear deal, he said. “It’s premature to make a judgment as to what the outcome will be, but we’re still talking.