PA Mufti: Sharia’h obligates every Muslim to wage Jihad against what the PA calls “the ‎thieving Jews” ‎

Referring to previous Islamic religious rulings that “obligate” Muslims to “fight ‎against the thieving Jews,” a host on official PA TV interviewed the PA Grand ‎Mufti on the aspects of Sharia’h law in connection with the UAE and ‎Bahrain’s recent peace agreements with Israel.‎

The PA Mufti stressed that “if an inch of the Muslims’ lands is stolen, Jihad ‎becomes a personal religious commandment for everyone.” The PA defines ‎all of the State of Israel as stolen Islamic land – a waqf – which is an ‎inalienable religious endowment in Islamic law. Therefore, according to the ‎PA Mufti, Shari’ah law prohibits Palestinians from recognizing Israel in any borders and commands that every Muslim has a personal duty to ‎wage war against Israel until the “Muslim” land is freed. He further stated that the UAE and Bahrain are ‎‎“twisting” these religious rulings, noting that this is “forbidden” and that they will ‎have to answer to Allah for this:‎ 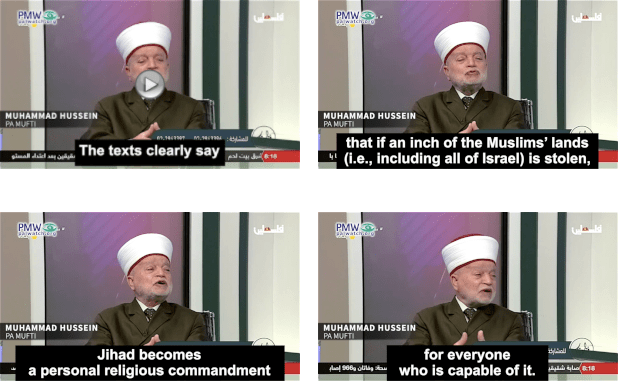 Official PA TV host: “All the religious rulings that were issued by the ‎nation’s religious scholars obligated fighting against the thieving ‎Jews, and they don’t disagree on banning normalization with the ‎Zionists. But some (i.e., the UAE and Bahrain) reinterpret these texts ‎and welcome the normalization…”‎

PA Mufti Muhammad Hussein: “The texts clearly say that if an inch of ‎the Muslims’ lands (i.e., including all of Israel) is stolen, Jihad ‎becomes a personal religious commandment for everyone who is ‎capable of it. This is the Shari’ah law that the religious legal scholars ‎have followed from the beginning, from the days of the companions ‎‎[of Prophet Muhammad]. The fact that the Muslims cannot – in some ‎of the Islamic lands, or in some of the Arab lands –restore [their lands], ‎doesn’t mean that the ruling has changed. No, the religious ruling is ‎firm, valid, and present. The minimum we demand from those (i.e., the ‎UAE and Bahrain) who are trying to twist the texts is that they read the ‎texts correctly and not distort them… [It is forbidden] for them to make ‎religious legal rulings while changing the texts and twisting the texts, ‎according to the whims of this or that ruler (i.e., the UAE and Bahrain). ‎This is forbidden for them, and Allah will ask them about this.”‎

Palestinian Media Watch has already exposed several times that the PA ‎Mufti believes that all of Israel is holy Islamic land and that Islam therefore ‎prohibits that Muslims accept Israel’s existence – in any borders:‎

PA Mufti Muhammad Hussein: “The land of Palestine ‎is waqf (inalienable religious endowment in Islamic law). It must not be ‎relinquished nor must any part of it be sold… It is the duty of the ‎leaders of the [Islamic] nation and its peoples to liberate Palestine (i.e., ‎all of Israel) and Jerusalem, to prevent the Judaization in it.” ‎

PMW has documented numerous other responses from the PA condemning ‎the peace agreements.‎

The Mufti used the term “fard ayn” which is a personal Islamic commandment ‎incumbent on every Muslim to describe the seriousness of the obligation to ‎wage Jihad. ‎