Israeli forces enter West Bank village of Aqraba and take individuals in for questioning, confiscate car used in drive-by attack; terrorist who carried out shooting not among them 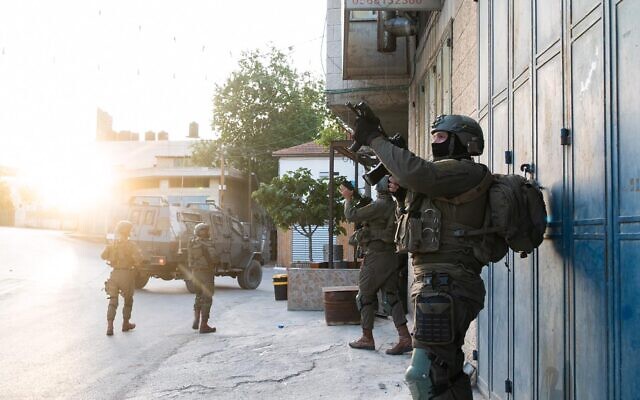 Israeli security forces entered a West Bank village early Tuesday and made a number of arrests in connection with a Sunday drive-by shooting attack at a northern West Bank junction that left three Israelis wounded.

The detained Palestinians, who were arrested overnight for their suspected involvement in the terror attack, were taken for questioning.

Neither the Israel Defense Forces nor the Shin Bet security services specified how many suspects were detained.

The gunman was not among those arrested, but the detainees were suspected of aiding him, according to the Kan public broadcaster.

The IDF said security forces took the car used in the attack, a gray Hundai van that was found Monday in the village of Aqraba. Channel 12 reported that the security establishment believes the vehicle belonged to a Hamas member who lives in Aqraba.

Photos of the car began circulating on Palestinian social media showing that it was hit by at least two bullets, one of which shattered the back windshield and the other hit the trunk door. That matched the claims by soldiers at the scene, who said they returned fire at the vehicle after the driver shot three Israeli teenagers, and wounding two gravely and the third lightly.

Shortly after the vehicle was spotted outside Aqraba, Israel Defense Forces troops arrived at the scene. Clashes broke out between the soldiers and Palestinian locals, who managed to set the van alight before it was seized by the troops. 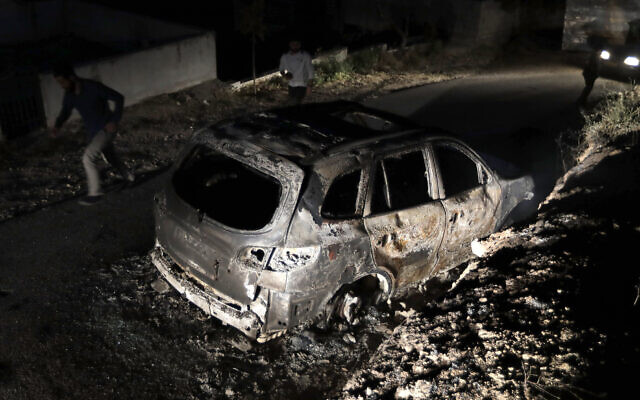 The burnt-out vehicle suspected to have been used in a shooting attack, torched near the village of Aqraba in the West Bank, May 3 2021 (Nasser Ishtayeh/Flash90)

“I have ordered a continued state of high alert in the area given the recent incidents,” Defense Minister Benny Gantz said Tuesday while touring the West Bank.

Commenting on the overnight arrests, Gantz said, “We’ll get the terrorists and settle the score with them.”

He added: “I continue to pray for the recovery of the injured still hospitalized in serious condition. Our security forces are prepared for any scenario and will continue to use any means necessary, wherever necessary, to protect our citizens’ safety.” 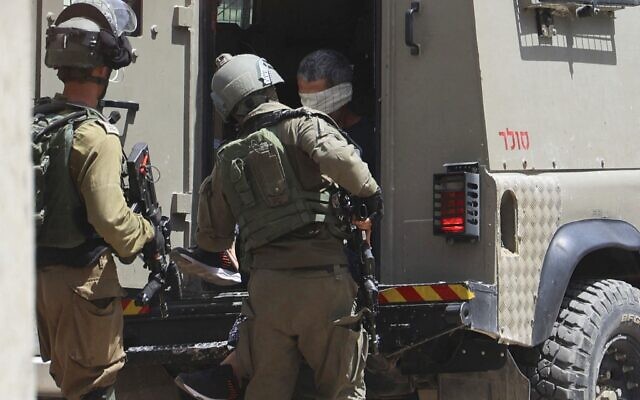 Israeli soldiers detain a man during a security operation in the Palestinian village of Aqraba, east of Nablus in the northern West Bank, on May 4, 2021. (Jaafar Ashtiyeh/AFP)

The IDF had initially said that it was believed there was only one assailant behind the attack, but on Monday said it was looking for more than one suspect.

According to Beilinson Hospital, where the three injured Israelis were taken, one of the victims, Yehuda Guetta, 19, from Jerusalem, remained in critical condition with a head wound as of Tuesday morning, and doctors feared for his life.

Benaya Peretz, 19, from Beit She’an, who was shot in the back, remained in very serious condition. The third victim, Amichai Hala from Safed, also 19, has already been released from the hospital to recover from his wounds at home.

The attack came amid heightened tensions in the West Bank after the Palestinian Authority announced it was indefinitely delaying elections planned for later this month, blaming the decision on ostensible Israeli refusal to allow PA voting in East Jerusalem.

The IDF also bolstered its forces in the West Bank for the month of Ramadan, a period that regularly sees an uptick in violence.

Sunday’s shooting was followed by several apparent retaliatory attacks by Israeli settlers, including the storming of a Palestinian village in the predawn hours of Monday morning, where they threw rocks and stun grenades and started fires.

Clashes broke out between the residents of Jaloud village and the Israelis from the nearby Shiloh settlement, whereupon IDF soldiers and Border Police attempted to break up the fighting by firing rubber-coated bullets and other riot dispersal weapons at the Palestinians, injuring four of them. Eleven Palestinian residents of the village were arrested by the IDF. No settlers were arrested. Several police vehicles’ tires were punctured by the Israelis.