The Illustration and the Uproar: “The Final Solution,” on the Iranian Leader’s Website

Originally published in Hebrew in

Ayatollah Khamenei posted an illustration on his website ahead of al-Quds Day, featuring Palestinian soldiers dancing in Jerusalem, using the creepy term from the Holocaust – along with his call to continue the armed struggle. All this, in light of reports of the Israeli-Iranian cyberwar, centered on an Iranian attack that was revealed on Ynet. US Secretary of State Pompeo called the image an “Anti-Semitic and repugnant illustration”.

“The Final Solution,” on the official website of Iran’s supreme leader: Iran’s spiritual leader Ayatollah Ali Khamenei on Tuesday delivered his blessing ahead of al-Quds Day to be held this Friday. In the center was a colorful illustration depicting East Jerusalem, centered on the Temple Mount mosques. US Secretary of State Mike Pompeo condemned the illustration: “Anti-Semitic and repugnant. The US knows that Khamenei’s words do not represent all Iranian citizens.”

The IDF spokesman also commented on Twitter in the Persian language: “This is the only thing the Islamic Republic can do: a childhood painting designed to convince itself that its dreams will one day come true. The Islamic Republic is anti-Semitic, denies the Holocaust and uses Nazi terms. On the one hand, reality, and on the other – Iran’s vain hopes. ”

The illustration shows Palestinian soldiers, military vehicles, Palestinian and Hezbollah flags, many weapons, Khomeini, Khamenei, Qassem Suleimani and Hassan Nasrallah in the mass celebration of liberation, and great joy on the faces of the Arabs and Iranians celebrating there. The intention, of course, is to release the burden of Zionist rule. The caption reads “Palestine will still be free” and under it reads: “The final solution – resistance (armed) to the referendum.” 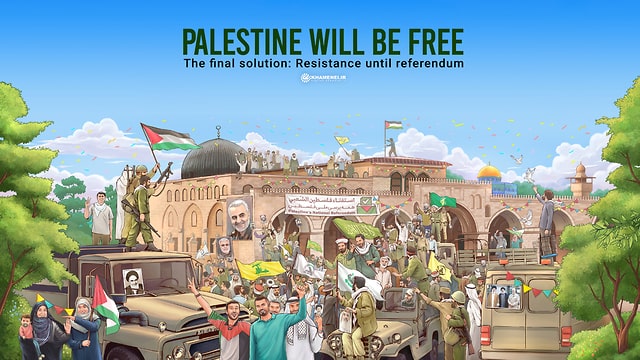 In doing so, the official website of Iran’s Supreme Spiritual Leader uses the term that is surely the most loaded and painful for the Jewish people. This comes amid growing tensions between Israel and the United States, on one side, and Iran on the other. The New York Times and The Washington Post reported that in recent weeks, Israel and Iran have exchanged cyber strikes, beginning with an Iranian cyberattack on Israeli water infrastructure uncovered on Ynet – and reports that Israel seems to be making it public.

Some believe that Israel’s cyberattack on the Iranian port ends this campaign, but at the same time, close surveillance of Iranian cyber activity continues. “They continue to respond to Israel, and with much greater power,” said the source.

The illustration was published as mentioned on al-Quds Day. Shortly after the Islamic Revolution, Ayatollah Khomeini declared that his forces would still liberate Jerusalem. Its name in Arabic and Persian, al-Quds, has been used as a nickname for Iranian operations, streets and buildings. Khomeini decided to dedicate the last Friday of the month of Ramadan to the city, the third holy shrine for Muslims, and perform a series of ceremonies that all revolve around the call for the release of al-Quds from the Zionist government and the handing over of the land to the Palestinian people. It has since been marked in the Iranian calendar and includes processions that burn the flags of Israel and the United States.

This year, due to the outbreak of the coronavirus, the mass popular parades were canceled and all government efforts towards al-Quds day were concentrated online. As mentioned, under the illustration the caption is written “The final solution – resistance (armed) to the referendum”. The referendum story is explained in a statement by Khamenei on the same page. “Jerusalem will be the second Kharmasher,” Khamenei writes, referring to a city whose occupation by Iran in the bloody and long-running war with Iraq marked the upheaval in power relations.

Dr. Raz Zimat, an Iranian expert from the National Security Studies Institute said, “Of course, the question arises whether it is a deliberate use or simply a scandalous lack of awareness of the final solution. You can’t be 100 percent sure, but it’s hard to see it. Other than the Holocaust discourse exists in Iran very intensely, if not obsessively, including significant efforts by the government to deny the Holocaust. Khamenei has also called the Holocaust a “myth”.

“The government in Iran claims to make a distinction between its treatment of Jews and its treatment of Zionism and the State of Israel,” Zimt added. “Sometimes it is obvious – for example, in their attempts to convince that they are really investigating the arson that took place this week in the Esther and Mordechai tomb. Sometimes this separation is not maintained at all, such as on the issue of Holocaust denial.”

Over the past two decades, Iranian leaders have issued a series of statements denying the Holocaust, holding large-scale conferences on the issue, and even sponsoring competitions, including cartoons, to prove the case and to ridicule the Holocaust. Former Iranian President Mahmoud Ahmadinejad said: “The Holocaust is a myth based on an irrefutable mythical claim” and that “the Zionists have invented a legend that Jews were murdered and given a divine, religious and prophetic seal legend.” Khamenei himself said: “I do not know if there was a Holocaust. In European countries, no one dares to talk about the Holocaust, and we do not know if it is real or not. And if it happened, how it happened.”