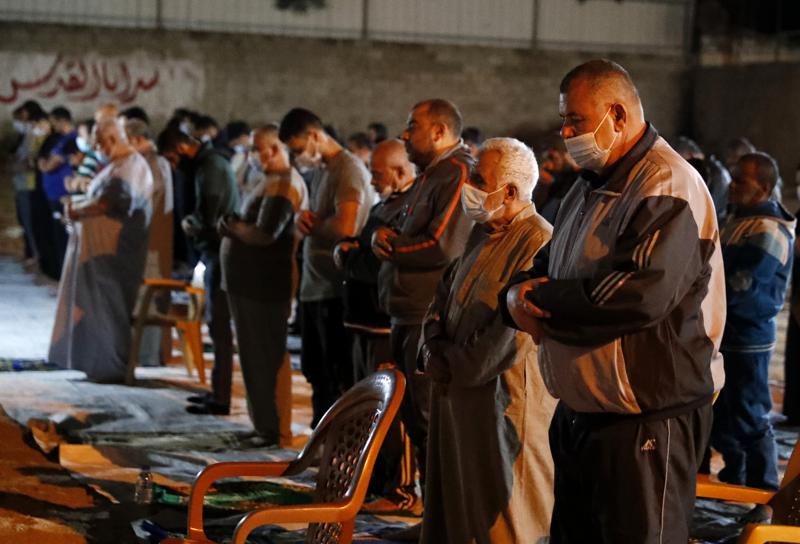 1 of 5
People, some wearing masks to help prevent the spread of the coronavirus, pray the evening prayer during the Muslim holy fasting month of Ramadan, outside a mosque in Gaza City, Tuesday, April 20, 2021. More than a year into the coronavirus pandemic, the worst fears are now coming true in the crowded, blockaded Gaza Strip: A sudden surge in infections and deaths is threatening to overwhelm hospitals weakened by years of conflict and Israeli border closures. (AP Photo/Adel Hana)

GAZA CITY, Gaza Strip (AP) — More than a year into the coronavirus pandemic, some of the worst fears are coming true in the crowded Gaza Strip: A sudden surge in infections and deaths is threatening to overwhelm hospitals weakened by years of conflict and border closures.

Gaza’s main treatment center for COVID-19 patients warns that oxygen supplies are dwindling fast. In another hospital, coronavirus patients are packed three to a room.

For months, Gaza’s Hamas rulers seemed to have a handle on containing the pandemic. But their decision to lift most movement restrictions in February — coupled with the spread of a more aggressive virus variant and lack of vaccines — has led to a fierce second surge.

At the same time, many of Gaza’s more than 2 million people ignore safety precautions, especially during the current fasting month of Ramadan. In the daytime, markets teem with shoppers buying goods for iftar, the meal breaking the fast after sundown. Few wear masks properly, if at all.

“Corona is not a game,” said Yasmin Ali, 32, whose 64-year-old mother died of the virus last week. “It will take the lives of many people if they don’t protect themselves in the first place.”

From the start, the course of the pandemic in Gaza, one of the world’s most crowded territories, was largely shaped by politics. A border closure — enforced by Israel and Egypt to varying degrees since the Islamic militant Hamas group seized control of Gaza in 2007 — helped slow the spread initially. In the early months, Hamas quarantined small groups of travelers coming from Egypt, and the first cases of community spread were only reported in August.

A first outbreak came in the fall. Hamas tried to contain it by closing schools, mosques and markets, and by imposing a nighttime curfew. By February, infections had dropped sharply.

At that point, Hamas lifted curfews. Students were back in schools, wedding halls reopened and street markets were back. Travelers from Egypt were no longer placed in quarantine or even tested. Instead they were waved through after a temperature check, on the assumption that they had already been tested in Egypt.

The decision to reopen was in part driven by economic concerns. The closures had further battered Gaza’s long-suffering economy, where unemployment stands at roughly 50% and among young people at 70%.

Hamas may also have been concerned about prolonging unpopular measures ahead of Palestinian parliament elections. In the May 22 vote, Hamas is competing against the Fatah movement of West Bank-based Palestinian President Mahmoud Abbas. There’s no reliable polling, but Hamas appears vulnerable to a Fatah challenge in Gaza, even as it is expected to do well in the West Bank.

The start of Ramadan in mid-April, with its crowded markets and late-night mosque prayers, further fueled infections, as did the emergence of more aggressive virus variants.

The European Hospital in the town of Khan Younis, the main treatment center for COVID-19 patients, is quickly running out of resources.

Its director, Yousef al-Aqqad, said 118 of 150 beds are occupied by patients in critical or serious condition. He said he would need hundreds more oxygen cylinders if the number of patients exceeds 150.

Shifa Hospital, Gaza’s largest, has 100 beds for COVID-19 patients, including 12 in the ICU. The hospital has postponed elective surgeries and closed outpatient clinics, while continuing life-saving services, such as heart operations and dialysis.

The Health Ministry said almost all of Gaza has been designated a “red zone” because of widespread community transmission.

The severe shortage of vaccines poses another challenge.

Israel, whose own vaccination campaign has been a success, has been broadly criticized for refusing to accept responsibility for vaccinating the Palestinians. Rights groups say that under international law, Israel remains responsible for Palestinians in areas it occupied in the 1967 Mideast war, including Gaza, the West Bank and east Jerusalem.

Israel has vaccinated Palestinians in annexed east Jerusalem and inoculated some 100,000 West Bank laborers who work in Israel and its settlements. But it says interim peace accords absolve it of broader responsibility and that this is particularly true in Gaza, from which it withdrew in 2005, while keeping tight control over borders.

So far, Gaza has received enough doses to fully vaccinate just over 55,000 people, with shipments arriving from the United Arab Emirates and the U.N.-backed COVAX program.

At the same time, skepticism is widespread in Gaza, especially when it comes to the AstraZeneca vaccine, which has been linked to rare blood clots, said Dhair.

Health authorities have been urging those older than 40 to get the jab, but thousands of doses of AstraZeneca are sitting on the shelves.

In crowded Gaza, it’s near impossible to keep a distance from others. Dhair said he also encounters widespread indifference. “There is no conviction by the people and even if we put checkpoints, they will remove the mask once they get past the policeman,” he said.

After the sharp rise in cases last week, Hamas tightened restrictions again at the urging of health officials. It reimposed night curfews and closed mosques for Ramadan evening prayers.

The after-dark lockdown dealt a new economic blow. Restaurants usually flourish in Ramadan after the faithful break their daily fast. In previous years, cafes and eateries would be full until dawn.

Ramadan provides temporary employment to 30,000 to 50,000 people, mainly restaurant workers and vendors. Most of that has gone with the new restrictions, said economist Omar Shaban.

Mamdouh Abu Hassira, whose seaside café with its view of Mediterranean sunsets is a popular Ramadan spot, had to lay off 15 of his 19 workers. Abu Hassira said it made no sense to him to ban families from enjoying iftar at his restaurant while allowing shoppers to crowd markets during the day. “We are destroyed,” he said of his business.

Salama Marouf, a Hamas government spokesman, said managing the pandemic was a balancing act. “The confrontation with the virus is a long-term one,” he said. “We try to take measures that could improve the health situation without hurting other sectors.”